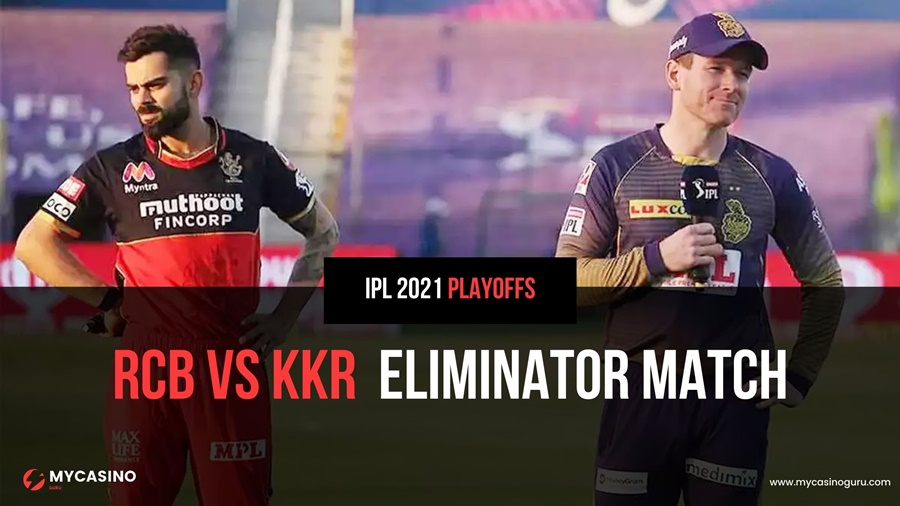 We are at the eliminator match after a fantastic Qualifier match between the Chennai Super Kings and Delhi Capitals. The Royal Challengers Bangalore will take on Kolkata Knight Riders on 11th October at Sharjah Cricket Stadium in this elimination match.

A couple of weeks ago, no one could predict the outcomes of both these teams. While Royal Challengers Bangalore had already sealed a spot for themselves in the playoffs, Kolkata Knight Riders were stuck in the midst of an altercation with four other teams. Well, things took a drastic turn when they eventually climbed up the leaderboard after a thumping victory against Rajasthan Royals. The results of other matches also affected the results of KKR, and they finally scored a playoff berth shaking off all the doubts surrounding them since the first leg of this season’s IPL.

In the second edition of IPL, KKR has been fearlessly backed by the tremendous performance and fantastic gameplay of some key players like Shubhman Gill, Rahul Tripathi, and Venkatesh Iyer.

Their bowling attacks have been effective against the opposite teams, and they have been a lot more aggressive in their approach since their last few matches. Not only have they been consistently picking up wickets, but they have also been pulling off effective strategies at different stages of innings – something that has built the success of their pacers and their spinners.

However, the captain is still carrying some doubt over his dry spell when it comes to runs; he still manages to optimize the resources when the time comes.

Royal Challengers Bangalore, on the other hand, seemed a little lower on the enthusiasm. They previously struggled with the Chennai Super Kings and the Kolkata Knight Riders, but since this season of IPL, they have turned some gears and have won all four opening games in IPL 2021.

The batting front of the RCB has been amazingly effective as Glenn Maxwell is fueling it with his tremendous all-around performance, and his performance is backed by the powerful Devdutt Padikkal & KS Bharat. In fact, these players have been proven to be so valuable for the RCB that they have gotten through the UAE leg of the IPL without much contribution from Virat Kohli or AB de Villiers.

The bowling front of RCB is also noticeably good, with Harshal Patel and Yuzvendra Chahal making the most of their talents. To their assistance, Mohammed Siraj has bowled well without picking up any wickets.

For KKR, this match is a standard win, and for RCB it is an opportunity they will not want to lose.

If RCB wins the Toss and Elected to Bowl

Probable Best Players of the Match

Ahead of the IPL 2021, the Royal Challengers Bangalore spent a fortune on Glenn Maxwell, and he has proven his worth in all the previous matches. He is an all-rounder and holds the fort for the team by swinging his bat for some huge runs and having a tight grip on the ball while bowling. He has smashed 498 runs with an average of 45.27 and is all set to roar in the eliminator match between KKR vs. RCB match today.

In the second leg of the IPL 2021, Varun Chakravarthy has been an outstanding addition to the Knight Riders and has made his mark this season. This outstanding player has managed to get 16 wickets from 14 games at a fantastic economy rate of 6.50. Chakravarthy bagged the award for the player of the match the last time KKR met RCB and gave away only 13 runs. He will be looking forward to giving the same performance against KKR.

Do you think differently than us? Then why not give it a chance and make lots of money from the prediction.

Head over to Uwin or Cricsbet – India’s favorite IPL betting site, and start betting on your favorite players. You can also predict the over-by-over outcomes, runs, and winners of the match with the best winning odds.

Hurry! The match is about to begin soon, and you wouldn’t want to miss cash prizes coming your way.

KKR vs RCB Head to Head in Playoffs

It was only in 2016, that both the teams have qualified together for the Playoffs but have never faced each other. This will be an enthralling match as the fans will witness the men in red taking over the men in purple for the first time in the IPL.

Going to bet on cricket?

Read everything you need to know about the playoff qualified teams, match schedule, and players to look for before betting on IPL betting sites for better chances of winning.

Live the Thrill of KKR vs RCB Eliminator Match today

Witness Bangalore vs Kolkata IPL 2021 match as they fight to make it to the finals. Experience the thrill of a groundbreaking match live from the stadium at Sharjah. Get your tickets now, before the seats get full at https://dubai.platinumlist.net/vivo-ipl-matches.

You can also join other players at cricket betting sites, play IPL Satta Matka or place your bets at the best betting sites to win huge cash in this IPL season. Grab the cash prizes before the IPL season ends.