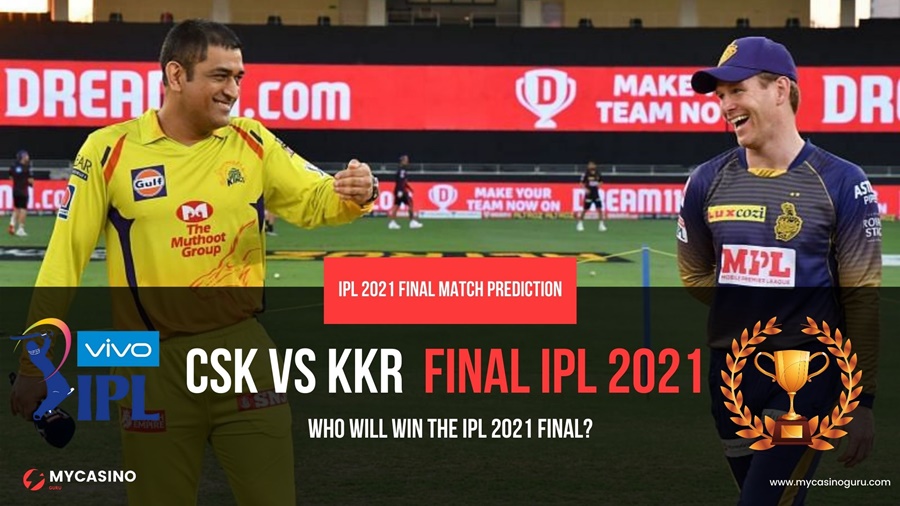 CSK vs KKR IPL 2021 FINAL – Who Will Win Match Prediction?

Alright then! The two legs of IPL and 59 matches later, we are here on D-day – where the winners of VIVO IPL 2021 will be decided.

Kolkata Knight Riders will be coming in confident after winning the last match against the solid Delhi Capitals by 3 wickets, and 1 ball left. It was a narrow win, but Kolkata proved their willow and emerged victorious on many occasions to make it against Chennai in the IPL finals.

Chennai Super Kings is the most incredible team of all time with balanced bowling and batting fonts. Right from the opens to the middle order to bowlers, each player in CSK brings the best to the table. They have been consistent since the first season of IPL and are considered the strongest team of the IPL.

In their last Qualifier match against Delhi Capitals, they managed to defeat them and took a flight straight to the finals of IPL 2021. Led by the captain-cool, the team has a strategic way of playing and has everything in place to help them win the matches.

Kolkata Knight Riders, too, have been tremendous this season. Their great Net Run rate and excellent performance have helped them gain the fourth position in the IPL table. Previously they were lingering in the bottom four, but the last few matches of the IPL league stage were game-changing for them, and they managed to seal a berth for the playoffs for this season of IPL will now face CSK for the coveted trophy.

Rahul Tripathi leading the batting front of KKR has contributed 383 runs in 14 matches. The young and talented Shubman Gill also supports the batting order, who scored 381 runs in 15 games. The player of the match in the last game against DC, Venkatesh Iyer, deserves a special mention as he has been consistently performing well and has been great for the Knight Riders.

The bowling is backed by Varun Chakravarthy and Sunil Narine, who has smashed 16 and 14 wickets so far. Even in the pressure, they have emerged as key players and have taken the team past the finishing line with their amazing attacks.

It will be a moment for the Kolkata Knight Riders to remember as they have qualified for the IPL final seven years after the 2014 edition.

KKR vs CSK Head to Head in Playoffs

This will be an enthralling match as the fans will witness the men in yellow taking over the men in purple for the second time in the IPL finals.

If CSK wins the Toss and Elected to Bowl

Think you can predict the scores better? If yes, then grab the cash prizes waiting for you at the sports betting sites.

Head over to Uwin or Cricsbet and start betting on your favorite players, over-by-over outcomes, runs, and player of the match and win huge rewards.

Don’t believe us? Register at the IPL betting sites and Check for yourself.

Probable Best Player of the Match

Iyer has been a great prospect for the Knights in the 2021 edition of the IPL and has scored 320 runs at an average of 40 and a strike rate of 125. He has also scored three half-centuries and is running high on confidence after scoring a magnificent fifty in the Qualifier 2 against Delhi Capitals and took the team over the finishing line.

Gaikwad is the star player of the team and managed to take the team home by giving them an amazing lead more than once. Through this season of IPL 2021, he has knocked off many runs off of the fastest and wildest bowlers and has managed to score 603 runs in just 15 matches at an average of 46.38. He will be a player to look forward to in this key match and the CSK fans will be eyeing him to bring the same lead to the team as he always does.

Read all about the playoff qualified teams, IPL match schedule, and players to look for before you start betting.

Do not miss reading about the best cricket betting tips for better chances of winning.

Get Your Ticket to the IPL Finals

IPL is coming to an end and you surely wouldn’t want to miss seeing the CSK vs KKR finals from the stadium. Get your tickets now, before the seats get full at https://dubai.platinumlist.net/vivo-ipl-matches, and witness your favorite teams coming together for the last time in this IPL season.

Let’s cheer together for the final CSK KKR match of the VIVO IPL 2021.

You can even place your bets and play  IPL Satta Matka to win huge cash in this IPL final.