There have been many disasters in sports that created chaos not just among the team members but also among the fans. Disasters, accidents and deaths are common in the world of sport and attract a lot of attention, especially because of the hype it gets in mainstream media. So let’s dip deeper into some sports disasters that shook the entire world.

Mentioned below are the sports disaster which took the world by surprise:

This happened during a UEFA Cup match between HFC Haarlem and FC Spartak Moscow, held on October 20 1982, at the Grand Sports Arena of the Central Lenin Stadium in Russia. A stampede started when a lady who lost her shoe stopped on the stairs to retrieve it. The people who were behind her also stopped and tried to help the young lady. But the stadium was crowded, and people began to stumble over one another, resulting in 340 deaths of the FC Spartak Moscow fans.

This disaster happened on February 6 1958, leaving everyone connected to Manchester United devastated. It is considered the darkest day for the football giants as they lost eight players and three staff members in a flight crash. The aircraft halted in Munich to refuel the tanks. However, when the plane took off from Munich, it crashed, killing 23 people and many others injured.

This disaster is popularly known as the Lima riot, which happened during a playoff football match between Argentina and Peru on May 24, 1964. The chaos and riot began when the referee disqualified a Peru goal when Argentina led one-zero. The fans went into a frenzy and tried to get to the field. The police had to fire tear gas to prevent the angry fans from marching into the field, which resulted in almost 318 deaths.

All the Pakhtakor Tashkent FC players, a team consisting of professional Uzbek players, were killed in a mid-air collision. The incident took place somewhere above Dniprodzerzhynsk, Ukraine. The accident occurred in August 1979 when the team was heading to play in the Soviet Top League. Unfortunately, all the 178 people on board, including the players and staff members of Pakhtakor Tashkent FC, were killed in the horrific accident.

This disaster took place in the Hillsborough stadium, located in Sheffield, England. It was April 15, 1989, when overcrowding forced fans to climb over the fences to witness the semi-final of the FA Cup, which was between Nottingham Forest and Liverpool. Unfortunately, the fences broke off because of the chaos, and people began to fall on each other, causing 96 deaths.

Just a few moments before the opening of the Fifa Qualifier match between Costa Rica and Guatemala, thousands of fans stormed their way into the Estadio Mateo Flores stadium. This incident occurred during the 1998 FIFA world cup qualifier and was responsible for the death of 83 people and injuring 140 others. The stadium’s design was poor, and overcrowding led to this disaster.

This huge riot broke out on February 1 2012 at the Port Said Stadium, Egypt. This happened during an Egyptian Premier League match between Al-Ahly and Al-Masry clubs. Fans of the Al-Masry club attacked their opponent’s fans with knives, bottles, stones and other objects they found in the stadium. This led to the deaths of 79 people.

Seventy-one fans were killed and 150 others injured during a stampede at Gate 12 or Puerta 12 after a River Plate and Boca Juniors match. This is one of the worst football-related disasters in the history of Argentina. This incident occurred when a massive crowd of fans paved their way forcefully into the stadium.

This is considered to be the worst fire in English football history. It occurred on May 11 1985, at the Bradford City Stadium, where the home team played against Lincoln City. The TV commentator reported a small fire initially, and in just less than 4 minutes, the fire engulfed a big part of the stadium because of strong winds. The massive fire resulted in 56 deaths and injured more than 265 spectators.

This is the second-worst disaster in the history of South Africa. It occurred at the Oppenheimer Stadium, located in Orkney, South Africa, on January 31 1991. The stadium could accommodate 23,000 spectators, but more than 30,000 fans entered the stadium. A brawl broke out between the fans when the Pirate fans objected to the referee’s decision regarding a goal leading to 42 deaths.

In a horrific incident during the Munich Olympics, the Palestinian Group that goes by Black September kidnapped 11 players of the Israeli team that was there for the Olympics. The extremists killed all the 11 players and demanded the Israeli government to free 234 prisoners from Israeli prisons.

This is one of the deadliest stadium disasters in Great Britain, where more than 85,000 fans reached the stadium, causing a massive stampede. It occurred on March 9, 1946, and more than 33 fans were killed and hundreds of others injured.

The 30 members of the Zambian Football Team were all killed in a tragic accident where the flight taking them to Senegal crashed following some malfunctions in the engine. The team was heading to play a World Cup qualifier match.

On June 1 2001, this incident occurred when the former South African cricket captain was returning home. However, as the plane was preparing to land, it lost visibility and crashed into the mountains. But many believe that it was all planned to kill Cronje by the sports betting syndicates as he was involved in match-fixing.

This incident happened in France at the Armand Cesari Stadium. One of the stadium’s terraces collapsed, killing 18 people and injuring a hundred others. Improper construction and structural problems were the reason behind this disaster.

These are some of the most tragic disasters in the history of sports. Most of them were caused by stampedes and accidents, which can be blamed on overcrowding the stadiums. Unfortunately, all of these incidents were extremely tragic, leaving fans devastated.

Football is the sport that sees the maximum number of injuries because of the gameplay and the aggressive nature. It is estimated that there are almost 455,449 injuries worldwide in a year.

Swimming is considered the safest sport as it is easy on the joints, and also, you don’t need to come into connection with other players, reducing the risks of collision between players.

Base Jumping has to be the most dangerous sport as statistics show that the most deaths from any sport are from Base Jumping. 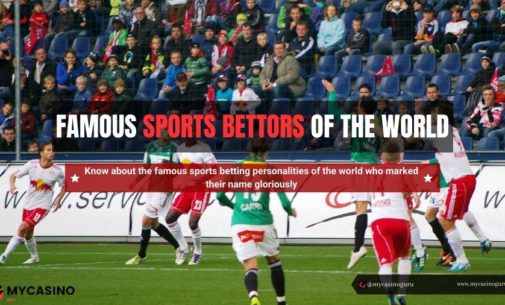 Famous Sports Bettors of the World

Finding something to like about sports betting is quite common. While some
MY CASINO GURU