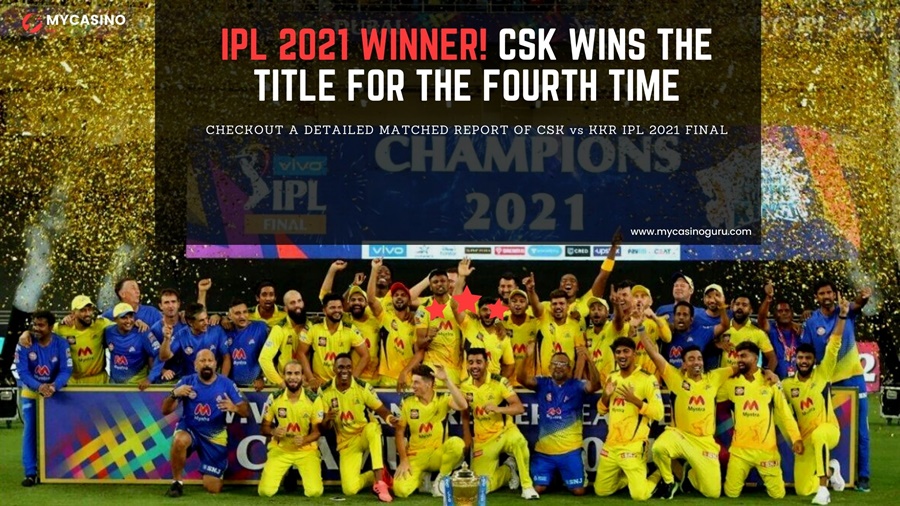 And the yellow army of the IPL has done it again! They have won the VIVO IPL 2021 by 27 runs and have registered the thumping win against Kolkata Knight Riders.

Chennai Super Kings lift the IPL trophy for the fourth time, and they have been full value for their victory this season.

MS Dhoni has proved that he is one of the best captains ever, and this time, he had more support from his teammates than ever. We have seen a fantastic turnaround, considering what transpired in 2020.

This win marks Dhoni’s 300th appearance as a captain with the trophy.

The celebrations strayed early in the CSK box when KKR had been wobbling in the last few overs. They were under pressure after the first innings when CSK ended their innings at 192/3 and tried to bring up the game, but they were undoubtedly under pressure and ended up winding at 165/9 at the end of the match.

CSK openers produced the goods once more, with Faf du Plessis playing an amazing knock in the final and took home a half-century. We cannot look past Gaikwad, Uthappa, Moeen, and their brisk innings that were exceptional and allowed du Plessis to set his field, dominate the pacers and take the team home in the latter part of the innings.

Despite Gill and Iyer providing a solid platform for the Knight Riders in the early part of the innings, their middle order was out of form, which ultimately meant bad news. Their weak middle order gave it away that it was going to be hard for them to chase down the massive total posted by Super Kings.

Bowling attacks by Thakur and Jadeja did the damage well, but Bravo’s economic spell was equally influential in the middle overs.

CSK thoroughly outplayed the inexperienced KKR unit. However, Morgan & Co. had been excellent this whole season and have roared their way into the finals where they couldn’t handle the all-powerful Chennai. But to make it to the finals is commendable, and they have a lot of positives going into the next season.

CSK shone Throughout Their Innings

Even though CSK was a little weak in the last season, they came full-power in IPL 2021 to take back their position.

KKR elected to bowl and put CSK to bat.

Faf du Plessis got another breath in third over when Dinesh Kartik couldn’t collect the ball, and Ruturaj Gaikwad knocked a four and a six in the same over to keep the ball rolling for CSK.

On the final ball of the powerplay, du Plessis and Ruturaj hit a four to complete another fifty-run partnership. KKR counteracted the same through Sunil Narine, who dismissed Gaikwad 11 runs later.

Further, du Plessis and Robin Uthappa went after Shakib in the 10th over and moved CSK to 80/1 the halfway of their innings. The two then completed fifty runs in just 25 deliveries, and du Plessis celebrated his 22nd IPL half-century in his 100th IPL game.

Narine gave KKR their second wicket and got Uthappa out.

Moeen Ali then joined CSK, and the pair minted all the scoring opportunities and brought up the third successive fifty-plus stands for CSK.

KKR avenged CSK by dismissing du Plessis on the final ball of the innings, but it was too late as he had scored 86 along with Moeen, who scored 37 off 20 balls and pushed CSK to 192/3.

After the tremendous innings by CSK, KKR was certainly put under pressure, but Gill and Iyer gave the team a good start. Gill came in creaming a four on the first legitimate delivery, and Iyer was lucky enough to have a ball missed by MS Dhoni.

The opening pair continued their momentum and gave the team a lead of 55/0 after 6 overs.

CSK was trying hard to keep things tight, but Iyer and Gill were on fire and scored 16 runs in the 10th over and took KKR to 88/0.

This got CSK to worry, and they turned the tables around by striking thrice in quick succession. Iyer was dismissed by Shardul Thakur, Nitish Rana through a good low catch by du Plessis, and after the 11th over, Josh Hazlewood got Sunil Narine out.

The continuous wicket-pouring in for CSK thrashed the hopes of KKR and helped CSK get three wickets at just nine runs.

Meanwhile, Gill brought up a half-century, but CSK continued their attacks as Deepak Chahar took Gill before the wickets in the 14th over. The disappointment for KKR continued as Jadeja bowled a double-wicket over, dismissing Dinesh Karthik and Shakib Al Hasan.

Further, Rahul Tripathi was dismissed by Shradul Thakur, and Eoin Morgan was caught out by Chahar in the 17th over.

The fate of the match was almost decided when Shivam Mavi and Lockie Ferguson added 39 runs but couldn’t complete the chase, and CSK sealed the IPL 2021 season with their fourth win.

Gaikwad, du Plessis, and Patel for the win.

He also won the emerging player of the season award.

Faf du Plessis was given the player of the Match award for his fantastic score of 86 (59).

Harshal Patel from Royal Challengers Bangalore won the player of the tournament award.

… And the Party Continues for CSK.

CSK players were patiently waiting for the moment, and Sourav Ganguly and Jay Shah presented the trophy to MS Dhoni, who handed the trophy to Deepal Chahar. The final match of the VIVO IPL 2021 between CSK vs. KKR ends with fireworks and confetti as the four-time champions took the coveted trophy home.

It was a fantastic night for one of the best sides in the history of the IPL.

Here’s what the Players have to say

“Before I start talking about CSK, it’s important to talk about KKR. If any team deserves to win this year, it is KKR. It wasn’t easy for them to come back in the manner they did. We shuffled a few players and used them in a different way. We had match-winners in different stages and others were chipping in. Every final is special but also if you look at the stats, we are the most consistent team to lose the final. I feel it’s important to come back strong in the knockout stages and don’t let opponents win the game. That was a conscious effort. I hope CSK can keep doing that for years to come. Frankly, no conversations. We don’t really talk a lot. More one-to-one conversations in practice sessions. As cricketers, I feel our practice sessions have been really good and that’s where we did our best. Thanks to the team. You can’t win without them. But also individual performances can help you in the knockout games. It’s about ensuring that if you’re playing a good knock, to make the most of it. I would love to thank the CSK fans. Even when we played in South Africa, we always got a good number of CSK fans. That’s what we crave for. Thanks to all of them. It feels like Chepauk and it feels like we are playing in Chennai. Hopefully, we will be back next year. We have to decide. It’s not about me and CSK. The franchise has to make a decision and we have to take a hard look at the people who can contribute for the years to come.”

“I am extremely proud of the fight that we have shown. Things did not start off well but the fight epitomizes the Kolkata fight. The support we have enjoyed from our owners has been outstanding. The support from the fans has been amazing as well, even after the first leg. Today, it just proved to be a game too many. Gill and Iyer have been outstanding. Gill is a classy cricketer, Venkatesh has a huge future ahead of him. He has a good head on his shoulders and the two have been the cornerstone of our batting. Rahul Tripathi left everything out there. Unfortunately, he had an injury today but he always tries to contribute in whichever way he can”

“Great day. I’m really grateful for today. My 100th appearance in the IPL. I have loved my time here, it is a great place to play cricket. Number four in the trophy cabinet is really good. Ruturaj is a special talent. He’s got a great head on his shoulders, which is the most important thing. He is humble and wants to keep getting better and he is getting better. He has a great future ahead.”

“Obviously, feeling at the top of the moon. Winning the orange cap and the trophy. Very happy with the season we had last year and here we are. It feels really great. We didn’t have a great season last time. Everyone in the group believed where we wanted to reach and we’re happy to get there. Not really looking to change my batting style. When I have less risk and more rewards, I don’t want to change that.”

Stay tuned to My Casino Guru as we will be back with the T20 reports and details on the T20 updates.

The T20 is not far and if you wish to win in the cricket season, make sure that you register yourself at sports betting sites. You can even sign up early at Uwin and Cricsbet to get some huge bonuses and increase your chances of winning.

Gear up for the next cricket tournament and read some helpful cricket betting tips to help you win.

Watch this space for all the upcoming information on sports, betting tips, and casino reviews.