Why Crypto Market is Down? - Crypto Currency Market Down 2021 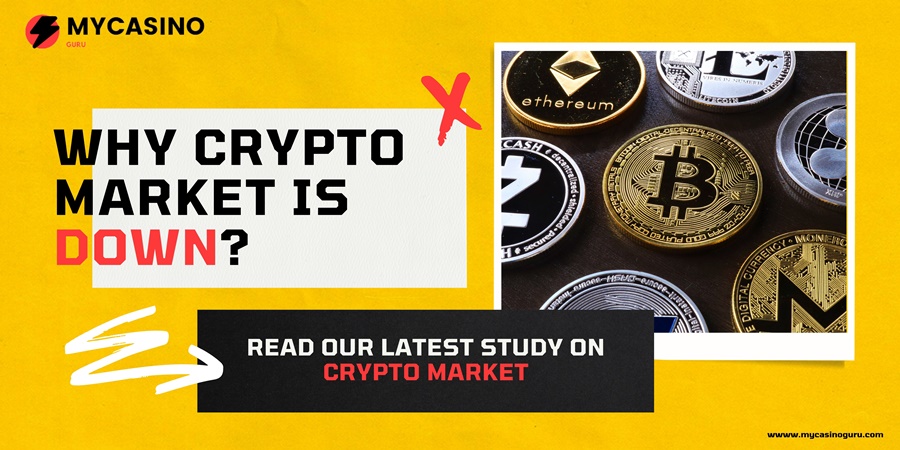 Why Crypto Market is Down? – Case Study

The volatility of the crypto market has always been subject to the scrutiny of millions of people around this big blue world. With new stories coming every hour, it’s almost impossible to keep yourself away from the discussions. Be it in your Boardroom meeting, or your living area, the murmur never stops.

So-called secure cryptocurrencies such as Bitcoin and Ethereum saw a dip along with altcoins that got thrown out of the water without any warning.

While everyone wants to carry out their research we thought why not we do that too but with facts backing up our claims.

What happened to Bitcoin?

The largest market cap holding cryptocurrency saw a dip of 6% last week, leaving the panicky investors running to sell portions of their holdings. While a brief high of $60,000 was touched on November 22, 2022, it quickly fell back to $54,400. And is now trading at $56,509 at the time of writing.

Strangely enough, El Salvador, the first country to adopt Bitcoin as a legal tender, announced that it’s currently planning to build the ‘Bitcoin City’ backed up by Bitcoin-Bonds. But it looks like such a massive project wasn’t strong enough to keep Bitcoin from stumbling in the hands of fate. Leaving everything on a slippery slope. (Pun intended)

Ethereum: Sorry for the inconvenience.

The second-largest cryptocurrency in the world, Ethereum or simply Ether, slipped by 3.7% in the previous week. And is currently trading at $4,127 at the time of writing.

Ethereum gas’ skyrocketing prices are making users abandon this smart contract blockchain network. Su Zhu, founder of Three Arrows capital ranted on his Twitter account about how affordability is an issue and he can’t stand the trauma that the community is going through these days.

It’s worth mentioning that if a new investor just buys some fractions of the crypto or wants to get a hold of DAPPS (decentralized applications) or get in touch with the hype around NFT’s (Non-fungible tokens), the latter should learn a thing or two about how wallets work and still, Ethereum charges a hefty sum which can be pretty frustrating in the long run.

Dogecoin, Shiba Inu, and the dip.

Ever since Dogefather Elon Musk’s support for Dogecoin fell short, the meme-based currency hasn’t been doing well. Dogecoin happened to fall by 3% in the past 24 hours even though it came out as the most searched cryptocurrency in the US, leaving giants like Bitcoin and Ethereum in the dust but as for the far as the value estimations are concerned, things don’t look that good for the meme-based currency.

Shiba Inu, the self-proclaimed ‘Doge killer’ went down by 4.5% in the past 24 hours and 14.8% in the past week. Shiba Inu which was once good enough to gain every attention-seeking investor’s cash got pushed away by Avalanche, a layer-1 blockchain platform and Ethereum rival as such.

Avalanche: Is this real life?

This new cryptocurrency phenomenon registered a massive surge of 83% in two weeks and a 20% gain in value in 24 hours.

AWAX(Avalanche’s token) managed to top an all-time high of $145.89 at the time of writing and also, pushed meme-based cryptocurrencies Dogecoin and Shiba Inu out of the Top 10 largest cryptocurrencies in terms of Market Cap. Making a tremendous jump of over 134% percent in the last three months.

With over 300 projects under Avalanche, it is all set to dominate and take over Ethereum shortly given that Avalanche is more cost-effective and fast.

Putting the last nail in the coffin, Three Arrows Capital, a company that was previously head over heels on Ethereum switched to Avalanche. Plus, invested $200 million in a fund launched by Avalanche supporters known as Blizzard.

Phew! What should you do now?

We know that every crypto venture has tumbled down in the last week and things don’t look that good as they used to do. But, if you’re backed up by your very own research and have trusted the crypto wagon in its quest to revolutionize the idea of currency, you don’t need to shed a tear in these not-so-pleasing times. With almost everyone talking about how NFT are the assets of tomorrow and 2013 was the best time to invest in Bitcoin, it’s quite natural for investors to get worried about things without looking at the bigger picture.

We hope that the upcoming week marks a good time for crypto gurus and investors alike given that President Biden’s $1 trillion infrastructure bill came with a provision that had every eyebrow raised.

Making unreported transactions of NFT trading and crypto purchases fall under the definition of a felony.

If you’re a regular taxpayer and know that the virtual currencies are to be treated as property, similar to a stock or bond, you’d abide by the rules of the IRS that want you to report any receipts or exchanges of virtual currencies.

Consider this, you’re helping the state bring in more revenue, pretty much over 25 billion dollars in the next decade. Only a little portion of your privacy gets sent to the government officials if you happen to get into a business operation that includes crypto as a form of currency. The receiving party is required to report the information to the IRS.

Even if the above-mentioned statement might put you into a state of deep thinking, you should know that these provisions will not take effect until January 2024. In addition to that, the provisions are more likely to be adjusted to meet some necessary factors in the long run.

Also, the fact that the governments of all the democratic nations have started to pay attention to the whole crypto scene, various scams could be put to a halt if everything happens to go in the right direction.

you can always stick to the old saying, “By the dip and HODL”

1. What exactly is Cryptocurrency?

Cryptocurrency refers to the digital currency which is put into transactions through a transparent technology known as the blockchain. Currently, over a hundred cryptocurrencies are in circulation such as Bitcoin, Ethereum, Solana, Tether, etc.

2. How is blockchain transparent?

Blockchain works on a simple peer-to-peer mechanism allowing everyone in the network to see the records being mentioned more like a digital ledger that can’t be altered and is stored permanently.

3. Where is cryptocurrency stored?

Cryptocurrency is stored in a digital wallet. Each wallet has its unique address attached to it. Wallets can be maintained by a company for you, primarily known as crypto exchanges. When you make a transaction through this wallet, you’re charged a fee by the crypto exchange. If you don’t wish to pay the fees to a third party, you can hold your virtual currency in a private digital wallet.