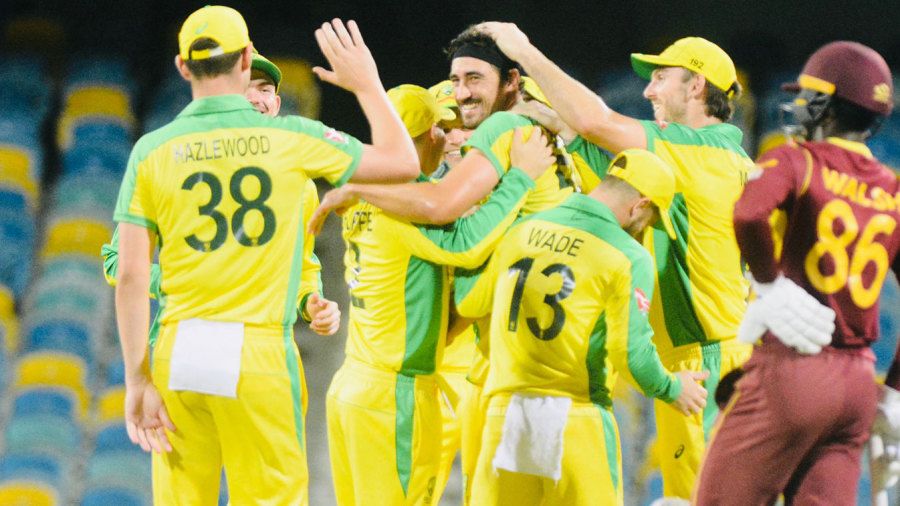 Australia 252 for 9 (Carey 67, Turner 49, Walsh Jr 5-39) beat West Indies 123 (Pollard 56, Starc 5-48, Hazlewood 3-11) by 133 runs (DLS method) Mitchell Starc took a five-wicket haul as he and Josh Hazlewood dismantled West Indies in the opening ODI to give Alex Carey, who had earlier played a key hand with the bat, a winning start as Australia’s ODI captain.

Carey, standing in for the injured Aaron Finch, had formed the backbone of Australia’s innings with Ashton Turner in a fifth-wicket stand of 104 in 19 overs before Hayden Walsh Jr sparked a late collapse with a career-best five-wicket haul.

However, Australia’s 252 – which was adjusted to a target of 257 after three rain interruptions cut the match to 49 overs – quickly looked imposing as Starc and Hazlewood got to work with the new ball to leave West Indies in a heap at 27 for 6. Starc took three wickets in his first spell and then returned to end the aggressive rearguard of Kieron Pollard. Pollard hit a 41-ball fifty, but the West Indies captain had been left with far too much ground to regain.

Starc, whose form had improved through the T20I series, removed Evin Lewis first ball with a low return catch from a leading edge and then produced a trademark inswinger to castle Jason Mohammed. Hazlewood then showed off his skills with a superb one-handed catch to his left off his own bowling to snaffle Shimron Hetymer’s leading edge – the pitch, where the ball was going through the top, proved tough to drive on.

Nicholas Pooran became Starc’s third wicket when an lbw decision was upheld with the ball trimming leg stump and Hazlewood kept pace with his new-ball partner as Darren Bravo drove carelessly to point, when some circumspection was needed, and then Jason Holder hooked to long leg.

At six down inside eight overs, the match was heading for a very swift finish but Pollard counterattacked against Adam Zampa, with Alzarri Joseph providing solid support in a seventh-wicket stand. Mitchell Marsh broke through when he knocked back Joseph’s off stump before Starc returned to add the finishing touches with his eighth five-wicket bag.

For only the third time since 1980-81, Australia handed out three ODI debuts in the same game with Josh Philippe, Ben McDermott and Wes Agar given their caps. For South Australia quick Agar – his brother Ashton handed him his cap – it was a first international appearance. Agar ended up delivering six tight overs after the early damage inflicted by Starc and Hazlewood.

Philippe and McDermott were paired at the top of the order – the last time Australia had two new openers in the same ODI was also the last time they fielded three debutants, against Sri Lanka in 2012-13 – and they made a strong start led by Philippe who dominated the scoring. Philippe twice cleared the ropes in the first ten overs, the first a pull off the slightly wayward Sheldon Cottrell and then a clean strike down the ground off Mohammed, before undoing his good work when he chopped on trying to give himself room against Akeal Hosein.

The in-form Marsh set off in positive fashion before glancing a catch down the leg side that wasn’t given on field but was overturned by DRS – Marsh knew his fate and was walking off when the review was called.

On a surface where the ball was occasionally going through the top from the quicks and offering some turn for the spinners, timing wasn’t always easy and Australia’s innings became harder work against good spells from Hosein, who bowled his ten overs straight through, and Joseph. Moises Henriques’ difficult 24-ball stay ended with a top-edged a sweep to short fine-leg and when McDermott – who had only faced 48 balls in 25 overs – nicked the deserving Joseph to slip, Australia were 114 for 4.

By then Carey had already opened his boundary account with a slog-swept six off Hosein and after a second rain break, he took consecutive boundaries from Mohammed’s part-time offspin.

Turner was given a life on 12 when he pulled Cottrell towards long leg but Mohammed could not hold a low chance as he ran in off the boundary. That was in an eight-over period where Australia did not find the boundary against some tight bowling from Walsh Jr and Joseph.

Carey began to kick things on when he brought up his fifty with a flat six over long-off, which was followed next ball by a scooped four off Holder. Turner then started to find his range with back-to-back sixes off Holder – the first a strong blow over wide long-on followed by a top edge over the keeper – before another rain interruption.

Walsh Jr had been held back until the 29th over by Pollard but then conceded barely three an over for the majority of his spell. In his eighth over, Carey missed a sweep to lose his leg stump and Turner top-edged to deep square one short of his fifty, which was followed by Starc and Matthew Wade picking out fielders deep on the leg side in a five-wicket haul that took 16 balls to complete. But in the end, though, Australia had more than enough.