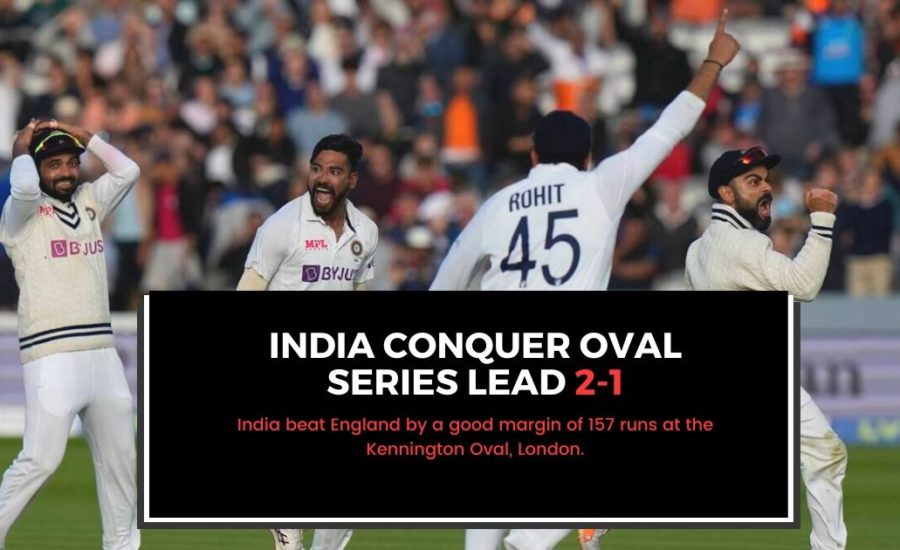 India Wins 2 Tests in a series in England

Cheerful faces, victorious smiles, and loud fans – such was the scenario at The Oval where India won against England by 157 runs in India vs. England’s 4th test match.

In a perfectly balanced test match where the winning swung between both the teams, India showed why they’re one of the best Test teams in the world.

Virat Kohli continues to make his mark as a captain. After this win, he has joined the elite team as this is the first time since 1986, under the captaincy of Kapil Dev, that India has won 2 Tests in a series in England.

This win is important and celebratory because this is also the first time India has managed to hold the winner’s title at Lord’s and The Oval in the same series.

England was bowled out for 210 from 100 for no loss through the first session. The fans went berserk on celebrating this big win, and the Indian players – articularly Kohli — were admired amidst fans’ hoots at the south London venue.

While Rohit Sharma bagged the trophy for the man of the match, Shradul Thakur kept the fans hooked to his gameplay with his centuries.

“I wanted to be on the field as much as I could. That hundred was special. Virat just mentioned the effort from the batsmen, and as a unit, it was really important. Kept my head down and batted the situation and once we got the lead, we wanted to put pressure on the opposition.” – says Rohit Sharma after the win.

The Indian players have showcased their A game since the first day of the India vs. England test match. If they continue to maintain their form, they might even win the series with an already taken the lead.

“Tough situations build strong people. Onto the next one,” Kohli said in a tweet after the win.

With India going into the fifth and final test with the lead, the fans have their eyes on the key players to the team.

Let’s have our fingers crossed and our winning jingle set for the final match of the series at Old Trafford that starts on Friday.

Also Read: ONLINE CRICKET BETTING – HOW & WHERE TO BET?