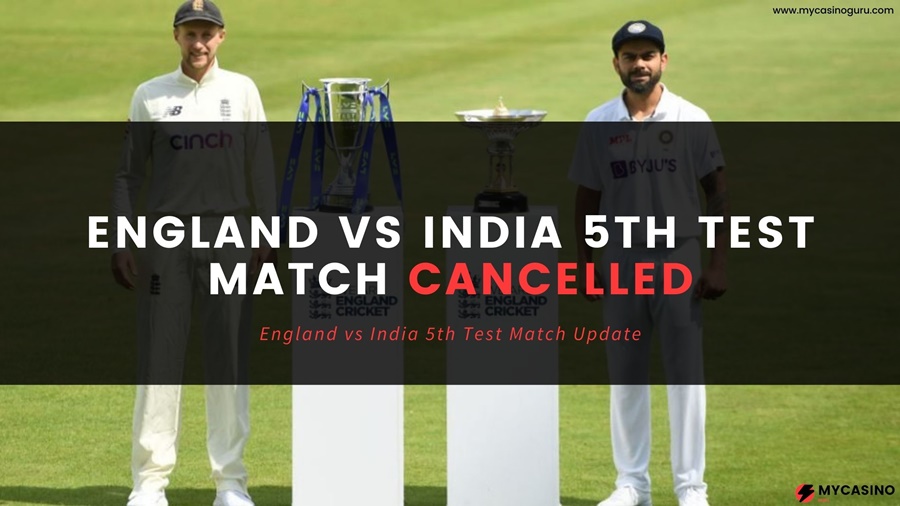 Who said cricket drama is a passe? The India Vs England 5th Test match has seen a lot of ups and downs. The 5th test match of LV – Insurance Test Series, scheduled to begin at Emirates Old Trafford, Manchester on Friday, 10th September 2021 stands canceled. India Vs England test match, first labeled as forfeited by India, later declared as canceled on Friday 10th September 2021, by the England and Wales cricket board (ECB).

The 5th test match cricket of India Vs England was overshadowed by the fear of COVID spreading. The COVID scare started during the fourth test match when three staff members of the India squad, namely head coach Ravi Shastri, bowling coach Bharat Arun and fielding coach R Sridhar were infected by the virus.

Earlier, on Thursday, a senior India squad player canceled the pre-match training session, after the assistant physiotherapist tested positive. The senior player was reported to go for repeated RT-PCR tests. On Friday the player refused to go to the field to play fearing for his family’s health.

Thankfully, the BCCI stood with its players this time and conveyed the message to the ECB. Then BBCI and ECB jointly canceled the 5th test match of India vs England 2021.

What happens now to the India Vs England 5th Test Match then?

There are three scenarios to what may happen to India vs England test match schedule:

Owing to the cancelation of the test match, the ECB is facing losses up to $18 million.

What lies before the Indian team now?

The Indian team is looking forward to the Indian Premier League or IPL 2021, which is due to start on 19th September in the UAE. Sponsors are waiting to fly the team to the UAE as soon as possible. Since the Indian team will have to undergo quarantine for 6 days in the UAE before the IPL starts.

However, if the Indian team by any chance again test positive for COVID, then they may have to quarantine for 10 days before they leave England.

Read more Cricket updates and news. Read Cricket betting tips and tricks to use it next time you bet.

Looking forward to the upcoming IPL 2021 on 19th September:

For those who have been waiting for the IPL 2021 to start, stay tuned for the matches to start from 19th September. You can place pre-match and in-play bets on match predictions on genuine sports betting sites like Cricsbet, UWin, etc.

Check out the 7 cricket betting apps available for Indian players. Besides, learn to place winning odds at the upcoming IPL 2021 after you read our ultimate guide to IPL Satta Matka.

Who won the man of the match in India vs England?

In England vs India 5th test match, Rohit Sharma was the Man of the Match, after he scores a brilliant century in the 4th Test at the Oval Cricket Stadium, London.