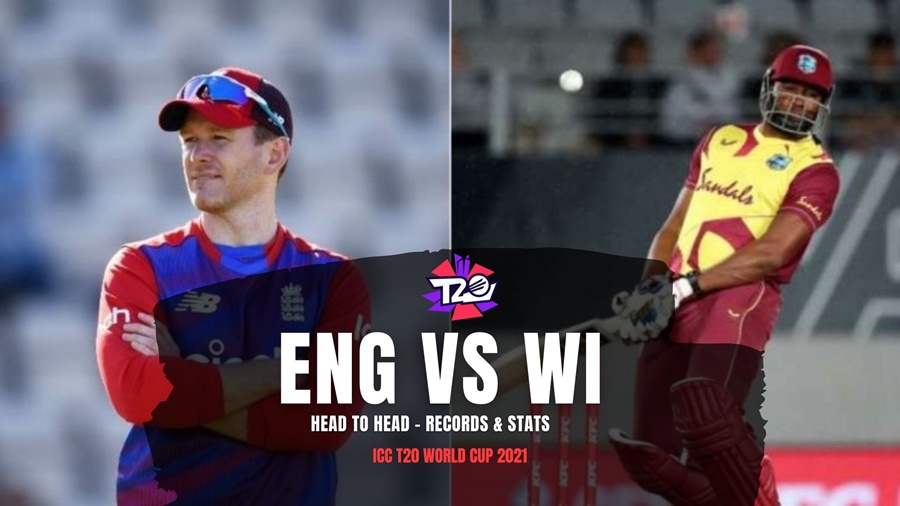 In their last game back in 2016, Team West Indies beat Team England. Today they are locking horns at the Dubai International Cricket Stadium at 7.30 IST, and each team is looking to collect the title this year. The teams have since not made an impressive performance in this year’s tournament warm-up matches despite being the winners and runner-up in the previous T20 World Cup. We have watched England win only one of their warm-up matches, whereas today’s opponents lost both warm-up matches to Pakistan and Afghanistan.

Read Also: MPL Play Pro league: Is It Safe Or Not?

The West Indies losing is not going to slow down the men from the Caribbean. This team possesses an outstanding amount of talent and is the most successful team in the history of the ICC Men’s T20 world cup ever since it was launched in 2007 and has won the title two times. England is quite optimistic and confident after winning the match against New Zealand in ICC World T20 warm-ups, and they are looking to score hefty runs and hit wickets.

From Cricsbet T20 world cup records England and West Indies have gone head-to-head in 18 matches in the span period between 2007-2021, where England has won eight of them, and west indies have won 11 of them. In 2019 at Warner Park, the teams played a T20I where England won the match against West Indies by eight wickets. England is looking to turn over their losing streak and scoop a win.

West Indies Captain Kieron Pollard is unsure if Andre Russell, all-rounder, will play in their first opener of the T20 World Cup against England. After the most recent Indian Premier League, the player has been recovering from a hamstring injury that he experienced while playing for Kolkata Knight Riders under Eoin Morgan captaincy. In the warm-up toss loss to Pakistan on Monday, he was absent. However, he participated in the second last, and final practice match against Afghanistan, where he took 1-13 overs and scored 11 off 16 balls. The captain stated that Russell was present in the warm-up games after not playing any cricket match in three to four weeks. Both Russell and Carlos, who finalized the win for the team by blasting four sixes in a row, will not be at today’s game. The captain advocates for the team to uphold the never say die attitude and work as a team to move on from their sloppy warm-up form and replicate winning again this season. He is keen on making a fresh start in the Super 12 round. Player Chris Gayle is known to score the most runs in T20I matches they’ve been to with England and has completed 409 runs in 13 innings. The team expects him to show up and perform in today’s match. What do you think? Place your bets on this match at Cricsbet, a chance to win with the winning team.

England’s captain Eoin Morgan is a keen left-hander who focuses on bringing the team back in momentum at this tournament. Eoin has amassed 221 runs in 12 innings in previous matches with England, which has been very impressive. The team all-rounder Dwayne Bravo has dismissed 12 English batters in 12 matches, with his best T20I figures being 3/37. The Chennai super kings player impressed their fans in the IPL season with his ability to slow down the run and perfect timing on when to take the wickets, and that is exactly what this team needs to win. Their leg spinner, Adil Rashid, has hit 11 wickets in seven innings, termed as the leading wicket-taker. The leg spinner has amazing spinning abilities, and he could be a game-changer too.

There is no doubt that the two teams will meet again in the opening of the Super 12 stage a few days to come, and as you look forward to that day, stay updated on the T20 World Cup matches and discover the faces to be featured in the T20 World Cup; experienced and new players. However, in today’s match, the teams’ strength has not changed, and they plan to get out of the group.

Currently, Sri Lanka and Bangladesh have qualified for the next round, which means that both teams cannot afford to slow down their momentum and need to be victorious today. England’s batting department may be pretty shaky. They are missing some batsmen, Curran, Archer, and Stokes, but the team is characterized with potential and depth with players Jason Roy and Jos Buttler; thus, West Indies ought not to underestimate them this season. West Indies will bring in full ballast from the captain and Andre Russell; however, they have recently been known for not possessing an excellent record with the ball in the Powerplay.

The captains look to assemble the most conducive players to fit and play at the Dubai Stadium. For West Indies, the presence of power-packed cricketers who can change the game with a big task of timing the big hitters. They look to depend on their batting side to win. Team England has to find a way to improve their pace and fix the batting department, but they have the best all-rounders and spinners.

The two teams are considered a high rating encounter as they have the best players and the firepower to overcome other teams, and this match will be exciting, and you cannot afford to miss it. It will be no surprise if one or both of the teams end up in the finals of this tournament, for they are the strongest of all. Catch ICC T20 World Cup match previews and tips by registering today on these sports betting and online casinos and also win cash prizes and luxurious gift rewards while enjoying the most incredible cricket events of the year.