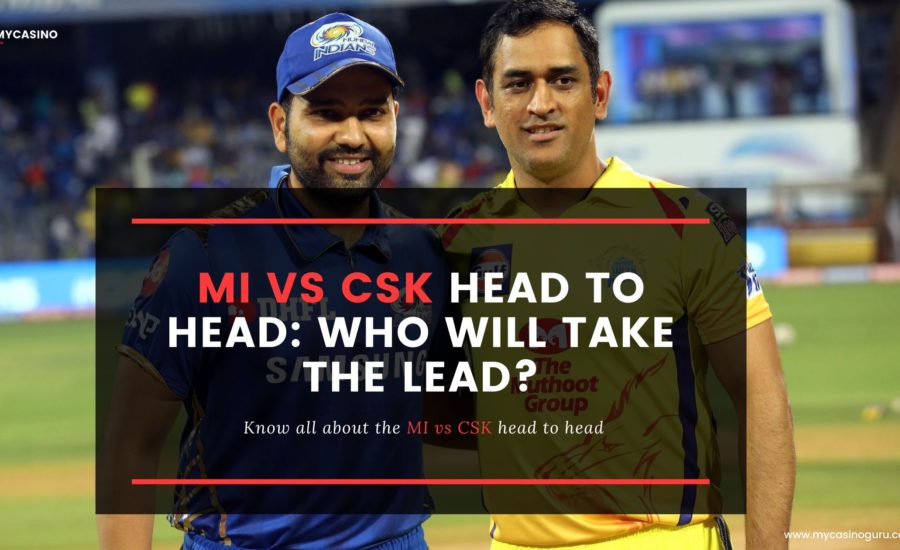 CSK Vs MI Head to Head: Who will take the lead?

For the IPL fans, this week started a little differently. It started with the excitement of IPL and a rush of curiosity filling their veins as they will witness MI vs. CSK head to head later in the week.

The cricket fans had been waiting for this 30th IPL match for a very long time. The match brings the excitement and thrill and brings the cheers and jingles of the fans as, according to the latest IPL news, the gates of the stadium are now open for the fans.

With the stadium welcoming the fans to enjoy the match live, the fun is sure to double up, and the fans will witness a gripping match between Chennai Super Kings and Mumbai Indians as they come head to head.

After the first half of the IPL edition, the teams are back with full power, enthusiasm, and vigor to take on each other in the 30th match of IPL, where MS Dhoni’s Chennai Super Kings will take on Mumbai Indians at International Cricket Stadium, Dubai.

The rivalry between the two teams is pretty evident, and when they are in the same stadium, you can almost feel the heat turning up!

The two teams have played each other 31 times in IPL and twice in CLT20, which is the number of times any two IPL teams have faced off against each other. However, Mumbai Indians bagged more victories as compared to Chennai Super Kings in the previous matches and also held more IPL victories than any other team in the IPL.

Interestingly, the teams own eight titles out of the thirteen IPL seasons combined, making them the most successful teams in the IPL. Suresh Raina of Chennai Super Kings is the highest scorer with 724 runs in 31 matches against Mumbai Indians, followed by Mumbai Indians Rohit Sharma with 693 runs in 28 matches.

With such outstanding players and staggering statistics, we are sure that every cricket fan out there can’t wait for the match to start.

Both the teams were in fantastic form in the first half of the IPL, and they will be willing to start the second half on a good note and after almost half a year. However, the playing conditions of the UAE will be a new challenge that the teams will have to face.

Taking a look at the Chennai Super Kings’ performance, we can say that they started well in the first edition of IPL this year and are currently securing a position in the top half of the IPL with 10 points.

CSK has a stronger front with fantastic batsmen like Ruturaj Gaikwad, Robin Uthappa, Moeen Ali, and Suresh Raina, who pressurize the opponent with their stellar run-hoarding and bat-swinging performance. Moreover, Chennai Super Kings also have the advantage of all-rounder players like Ravindra Jadeja, MS Dhoni (c & wk), Shardul Thakur, Deepak Chahar to maintain the second position they secured in the first half.

On the other hand, Mumbai Indians have always been IPLs favorite team and won the title in 2020 in the UAE. However, in this IPL 2021 season, they stand in the 4th position in the table with 8 points.

Looking at the past matches of Mumbai Indians, we can expect that the surfaces and pitches of UAE have favored Mumbai Indians, and we are eager to see whether that happens again this year in the remaining portion of the tournament.

As far as the game is concerned, Mumbai Indians’ have always stuck to the attacking plan with Hardik Pandya and Kieron Pollard on their side to catalyze the fire for other players as well. With multiple all-rounders in the team, they have a good batting lineup that allows them to keep coming hard at the opposing team’s bowlers.

The two most loved players of the Indian Cricket Team – Rohit Sharma and MS Dhoni would be leading their Mumbai Indians and Chennai Super Kings respectively.

In the last match, Chennai Super Kings beat Mumbai Indians and this time MI will love to take it back but it will not be easy. While CSK eyes to maintain and improve their current position, MI will be looking forward to a winning start.

However intriguing the match be, one thing is for certain that none of the teams will leave no stone unturned to make the open the IPL second edition with their win.

Players are the essence of the team and affect the team’s performance on the whole. Here are the probable playing XI of both teams.

Despite all the calculations and predictions, we are yet to see who kicks it off in style in the tournament’s first match.

If you can predict which team will hold the edge and will win this game, do not miss your chance to place your bets on the winning team at some of the best betting sites. Head over to the betting site where you can also predict the over-by-over outcomes and players’ performances to win big.

Want to get the Tickets to the CSK vs MI IPL Match?

You can experience the live thrill of the CSK vs MI head-to-head match by supporting your favorite team at the stadium. The matches will be held at the three different venues in UAE and you can get your tickets booked at https://dubai.platinumlist.net/vivo-ipl-matches where you will be taken to the purchase link.

The prices of the tickets will vary according to the venues, namely, Dubai, Abu Dhabi & Sharjah. The ticket prices are as follows:

So, get your cricket to feel on and gear up for some heat turning up on the stadium as two of the greatest teams – CSK and MI lock horns in UAE.

The Rolletto Casino was established three years ago in 2019. It
ROY PDT