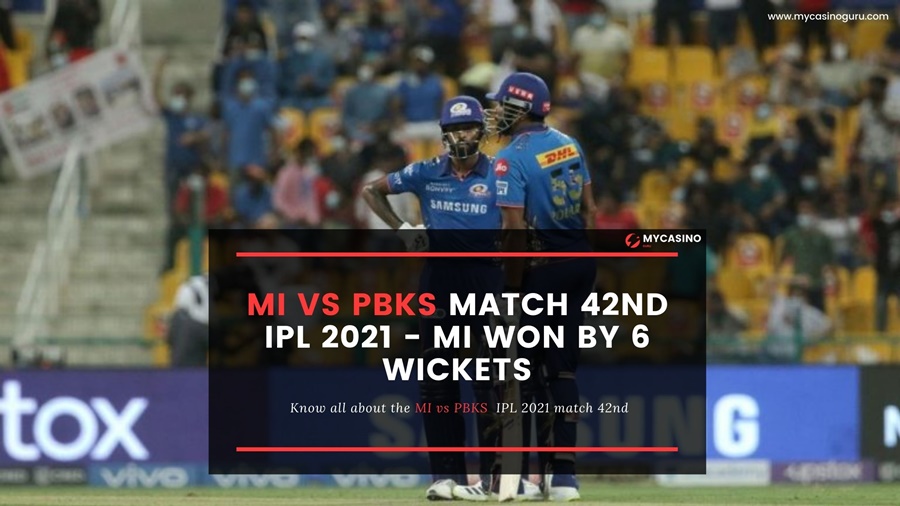 Everyone thought MI was not bringing their best form to the game in this season of IPL, but one cannot leave the Mumbai Indians out, especially when they know how and when to bring things back in the form.

Through the last match against Punjab Kings, Mumbai Indians have still kept their dream of making it to the playoffs alive with a six-wicket victory over Punjab Kings in VIVO IPL 2021. Mumbai Indians beat Punjab Kings at Sheikh Zayed Stadium and emerged as a strong team again through their phenomenal performance.  Although there was some poor fielding towards the end, Hardik Pandya and Kieron Pollard had this one in the bag from the beginning.

Both the teams made a few changes in their squads which was helpful for the MI but not for the Punjab Kings. In PBKS, Mayank Agarwal was replaced by Mandeep Singh replaced Mayank Agarwal while MI brought in Saurabh Tiwary and Nathan Coulter-Nile in place of Adam Milne.

With this win, Mumbai leapfrogged Punjab and jumped to 5th position with 10 points. They limited Punjab Kings and chased down the target in 19 overs to gain two points to climb up in the IPL points table. While Pandya and Pollard took it to the headlines, a stunning performance by Tiwary on 45 cannot be looked over as well.

A partnership of 45 off 23 balls took MI through this encounter and bagged them a win.

While chasing the runs, MI came across two huge dismissals in the form of Rohit Sharma and Suryakumar Yadav in the fourth over by Ravi Bishnoi. The team was a bit shaken when Mandeep Singh caught Rohit, and Bishnoi let one sneak through the defense of Suryakumar to disturb the batting lineup.

Quinton de Kock and Saurabh Tiwary held the fort, played towards a decent scorecard to rebuild the innings, and added a solid 45-run stand that gave the team a good lead.

Again, the team took a blow as de Kock was dismissed by Mohammad Shami in the 10th over. Hardik Pandya then joined Tiwary, and both of them continued the excellent work by taking the team past 90.

Hardik was glad to see Kieron Pollard in the middle, who got an easy four and a spectacular six in the 17th over that took the team closer to 110. WIth back-to-back blows and tremendous performances, Pandya finished the game in style as he slammed two fours and a six towards the end.

MI tried to keep things restricted in the powerplay that helped them later in the match.

Kieron Pollard | Player of the match

“Bowling’s a bit under-rated, eh! For me, it was just about doing what the team requires me to do. As an individual, I know what I can provide in all three departments. I just try to do my best whenever I get the opportunity. If needed, Rohit would have thrown the ball for me another over, but sometimes you just quit when you’re ahead. Sometimes you have to just do what you have to do for the team and let the specialists do their job. You watch the trend of all the matches going and see who will bowl. The landmark wicket was special. For me to get these wickets as a batter, I’ll take it each and every time. When you’re out of form, no matter how you play sometimes, the boundary looks like it’s 150 meters. It’s just a matter of practice for me. I admit that I don’t have pace, I don’t have spin, I don’t have a swing, I don’t have a swing, but I have a little bit of brain. It was important to get the two points. Took 19 overs to get to the target but the two points were more important. Maybe it can spark something in the dressing room.”

“We agree as a team that we haven’t been playing to our full potential. In such a format when you’re competing really hard, those things are bound to happen. You’ve got to stick together as a group because it’s a long tournament. We didn’t have the run that we would have liked but we’ve been in this situation many times before, so we can take a lot of confidence from that. The guys that we have in our squad, are ready to fight and not put their heads down at any given moment. So, it’s important to stick to that and ensure that we don’t lose our guard. The way he(Hardik) understood the situation was very crucial from the team’s perspective and obviously for his confidence as well. He took his time and then he knew when to go after it. It’s important for him to spend time in the middle after coming back from an injury. Dropping Kishan was a very tough call but we felt we needed a change somewhere, as a team. He looks very confident at the moment when you talk to him. I thought it was a tough call to make but we had to do something there. Tiwary has been good, scoring a 50 against CSK. We wanted someone who could nudge it around in the middle order and he’s playing that role well. I’m not ruling out anyone though. We want Kishan to be back and we want him to play for MI. The ball was coming off when we started off and the grass is coming off the surface in the middle overs and we understand that, as we need to adjust to the conditions. There are a lot of change-ups from the opposition as well.”

“It was a great fight from the bowlers, but 135 was not enough on this pitch. We should have got about 170 on this deck. The boys showed a lot of fights with the ball, we have done that two games in a row. The next three games will be interesting for us and the table looks interesting. It is what it is, we haven’t been able to handle the pressure. We’ll learn more if we play more together as a team and be positive. We have three games, so we need to take one game at a time. We need to go out there and enjoy ourselves. All our games in the UAE have gone down to the wire, hopefully, we can build on that.”

After this match, we are excited and are looking forward to seeing all that the UAE edition of IPL 2021 has in store for us.

Join the live action today from the stadium or at the sports betting sites.